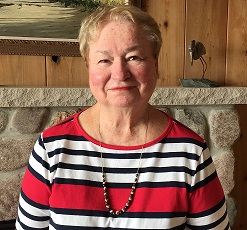 The heart of our LESA Ministry lies in its supporters, volunteers and caring staff, which is why Marilyn Brickler, Chair of the LESA Board of Directors, is a true gift to the students, families and schools that we serve. Marilyn’s dedication to supporting and strengthening Lutheran Christian Education reminds us why our ministry matters.

Read on to learn more about Marilyn’s servant leadership for LESA.

How did you first become involved with LESA?

This is my sixth year on the Board, and my third year as Chair. I first became involved with LESA when Kit Auble, LESA’s Director of Fund Development and Marketing, asked me to attend a LESA Fund Development meeting. Kit and I previously had chaired the Green Park Lutheran School auction, so we knew each other well. I was then asked to be a Board member, and a year later Kit asked me to chair the Fund Development Committee.

Most of my involvement has been with educational organizations. My degree is in elementary education through Lindenwood College. I taught kindergarten in the Bayless School District for four years. When my husband, John, joined the Army Judge Advocate General’s Corp we moved to Charlottesville, Virginia, where I did some substitute teaching and our oldest son was born. We now have five sons, and, although they are all grown, elementary education is still important to me. We also have 10 grandchildren.

Why is LESA’s mission important to you?

Over the years I’ve seen Lutheran education evolve. Academically, it’s grown. The new K-8 STEM Program is so vital for kids going forward, and the schools are doing a much better job of marketing themselves. LESA has had an important part in that. LESA also plays an important role in curriculum development by reviewing every part of curriculum on a revolving basis every five years. LESA also is involved in professional development for teachers and administrators. So, basically, LESA’s mission is important to me because I feel very strongly about Lutheran Christian education. It goes back to the Bible verse: “Train up a child in the way he should go: and when he is old, he will not depart from it.” Proverbs 22:6.

If students get that foundational eight years of Lutheran Christian Education – where every course is taught from a Christian perspective and the love of Christ is ingrained in them – that’s just invaluable. I feel strongly about the good things happening in our schools and that LESA is supporting that in many ways.

Fundraising is important to sustain LESA’s mission. This year, because of COVID-19, LESA’s auction (its most important fundraiser) had to be virtual rather than live. That didn’t stop LESA supporters from raising a phenomenal total of $263,000. That is so important for providing scholarships. With many parents furloughed or out of work, the need for tuition support is larger than ever. The LESA Board and staff also have done a tremendous job, moving quickly to secure the Paycheck Protection Program loan to help protect the operating budget, and being proactive in arranging a short-term loan, if needed. LESA also has been blessed to receive a $50,000 Partner Stability Grant from Lutheran Foundation of St. Louis, as well as an increase for scholarships in a grant from the Wayne C. Kaufmann Charitable Foundation. LESA is succeeding because God has blessed it with great people.

What is your favorite part of what you do for LESA?

I like recruiting Board and committee members. I know many dedicated people that I’ve worked with on other boards. I also like the fund development aspect of it. I am not afraid of asking – that’s not everyone’s cup of tea. (WARNING: If “Brickler” appears on your caller ID, it’s likely Marilyn “Asking”). I really enjoy the people I work with – the LESA staff, Board members and other committee members. It is personally rewarding to share time and ideas with them.

What is your personal experience with Lutheran Schools?

My husband and I joined Resurrection Lutheran Church in Sappington in 1973 where we are still members. Resurrection is one of four parishes that own and operate Green Park Lutheran School, and John serves on its Board. All five of our sons went to Green Park, and, until a year or so ago, we held the record for the family with the most kids continuously enrolled there.

What do you do when you’re not volunteering for LESA?

We go to Michigan every summer, usually from the first of June until early October, where we have a summer home connected to Camp Arcadia Lutheran Summer Camp. I’ve been going there since I was three years old. It is a beautiful place of faith and fellowship, and I spend time with friends I have grown up with. We play bridge and do dinners. My other hobby is collecting recipes. I subscribe to 26 cooking magazines and I collect and catalogue recipes by veggies, meats, desserts and the like. I love to cook, especially creative everyday recipes. These last few months have been great for that. I love to experiment and to host dinner parties.

What are your hopes for the future of Lutheran Education and LESA?

I really believe it is important to involve our congregations more and to reach out to parents and grandparents who can help support LESA. We look for help with fundraising activities such as Brew in the Lou or our annual Cooking for Kids Tribute Dinner-Auction at whatever level of involvement they can do. I think many of our families don’t really realize what we all do at LESA, and I think that is an area where we can improve. We’re still kind of the new kid on the block. God has blessed LESA this year in terms of donors and large gifts, and we’ve even picked up some new donors from the online auction.

People really do value Lutheran Christian education for their children and grandchildren and I believe that they want to see it continue and thrive. For many that will require some level of financial assistance. I also believe that if a Christian foundation is laid – train up a child in the way he should go – with Lutheran education through confirmation, that will form the basis for a Christ-centered life.

Another plus is the way the academics have improved over the years, and my hope is that they will continue to improve. As we look to the future, I know that God will bless us.

Thank you Marilyn for being a blessing to LESA and our Lutheran Schools! 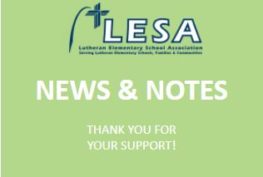 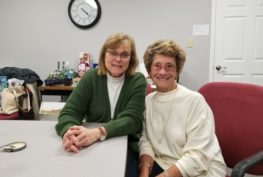